An overview of the culture in Vietnam. 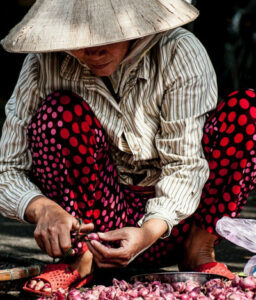 The culture of Vietnam is one of the oldest in Southeast Asia. Vietnamese culture is rich and diverse and was heavily influenced by Chinese culture due to 1,000 years of Chinese rule.

To help you understand the Vietnamese it helps to know a little about the culture. In Vietnamese culture, kinship plays an important role in society. While western culture is known for its individualism, Vietnamese culture places value on the roles of the family. It is still not uncommon to find three or four generations living under one roof.

Another example of the traditional values of Vietnamese culture are that weddings are still one of the most important traditions. The value of family is a very important aspect of Vietnamese life.

There are plenty of on-line sites and books that deal with Vietnamese culture if you wish to delve deeper into this area.

Also, as a brief guide, Vietnam stretches along the coastline of the South China Sea with borders to China in its north, Laos in the northeast and center and Cambodia in the southwest. It occupies approximately 127,243 square miles (329,560 square kilometers) which is about the same size as New Mexico.

There are about 90 million Vietnamese in this are with about 9 million living in Ho Chi Minh City. Vietnamese is the official language however a lot of Vietnamese also speak English. It is a very good idea to try to master the basics of Vietnamese as you will be shown much respect for attempting the language.

When meeting, a handshake or a small bow of the head is and appropriate form of greeting. Business cards (passed with two hands) is a valuable tool in making acquaintances. If you are given a business card, take the time to read it before putting it in your pocket.

Even though it is becoming old-fashioned, it is still wise not to point the soles of your feet towards any “household shrines” Also when summoning someone, make sure the fingers are pointed downwards not upright. Even though these will not cause any major offense it will show to your guests that you have taken the time to learn and understand some culture.

Loss of face is still important to most Vietnamese so try to be discreet and respectful if you have a problem. You might be seething with a feeling of injustice but screaming and shouting will not help. If you have a problem try to resolve it in private. 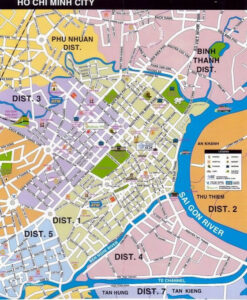 The largest city (formerly known as Saigon) is H.C.M.C and one of the most dynamic and engaging cities in South east Asia. HCMC represents the new young energetic nation that has left the wars and conflicts behind it. Vietnam has boasted one of the fastest rates of economic growth in the world.

Cities like HCMC and Hanoi are abundant with modern vehicles, upscale clothing shops, excellent restaurants and grand shopping malls. It also has endless construction that runs hand in hand with ancient pagodas and old French architecture.

HCMC was originally built as part of the Khmer civilization based in what is now Cambodia and today you will find millions of motorbikes swerving past old French villas and modern skyscrapers like the Bitexco tower.

If you come to live and teach in HCMC you might also wish to explore these amazing highlights.

1) Benh Thanh market; Dig out your bargaining skills and barter with the locals for anything from fresh flowers, cheap clothes,and souvenirs. There are also a number of places you can eat so you can make a day of shopping and enjoying the local cuisine.

2) Reunification Palace; The ex-home of the President of the Republic of Vietnam. It has been converted into a museum and is frozen in time in 1975. Close your eyes and you can hear the tank knocking down the fates and storming the Palace.

3) The War Remnants Museum; A fascinating museum that documents the struggles, injustices and brutality of war. You will find a modern museum with a large selection of old weapons and equipment along with a very humanistic approach to the American / Vietnamese war.

4) District 1 and Dong Khoi. From high tea to getting high is the difference between the backpackers’ area of Bui Vien to the 5 star hotels of Dong Khoi and its surrounds.

5) District 1,2,3,7 and 10 are where you will find a lot of ex-pats who live in HCMC. However, we are now spreading out to all districts and provinces.

take the time to find out a bit more about the etiquette of Vietnam here. Etiquette in Vietnam – Be Nice – Teaching ESL in Vietnam 2021 (vietnamesl.com)

4 thoughts on “An Overview of Vietnam”