What are the traditional Vietnamese clothes.

Vietnam is a multi-ethnic country with 54 unique ethnic groups, each with their own cultural heritage and traditional clothing, dress, and costumes.

The use of brilliant colors that appear to contradict one another in each ensemble is a common thing. Then in different areas the colors may be more muted. That is the joy for the photographer who visits Vietnam.

A short history of Vietnamese clothes.

In Vietnam, the current traditional clothing known as the Ao Dai has not always been the norm. Previously, the peasant people of Vietnam wore basic dress, while the elite wore Ao Giao Linh, Chinese historical clothing.

This began to alter in the 18th century, with the introduction of a more traditional style of clothing that was more appropriate for both men and women.

Due to the need of the Nguyen Dynasty for males at court in Hue in 1744 to wear pants and a gown that buttoned down the front, the Ao Dai was developed from the Han Chinese form of attire. The garment was simply defined as a “Long garment,” and the name Ao Dai was given to it. 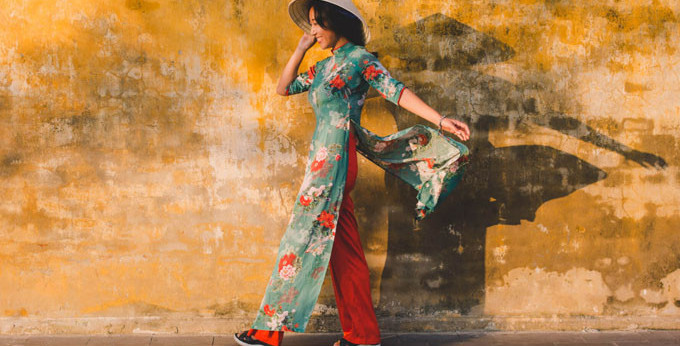 The modern outfit was not created until the 1920s. Traditional Ao Dai was created from many pieces of cloth sewed together in flaps to make the front and back of the lower half of the long garment, giving the appearance of the garment splitting down the sides, a feature that has been kept in the modern version.

The original Ao Dai also had bigger flaps and a looser fit, as well as a significantly shorter length and a high collar with a neck button.

The Dong Khanh Girl’s High School in Hue designed the older version of the dress in 1917 as their uniform, and a modernized version first appeared in public at the Paris Fashion Show in 1921.

The style was modified further in the 1930s, and designers in Saigon gave it its close-fitting look in the 1950s, resulting in the current Ao Dai style we know today.

The different styles of traditional dress.

The Mekong Delta women’s traditional garment companion, Ao Ba Ba, has been around for a long time. This shirt immediately conjures up images of rural women’s warmhearted, natural, and gentle beauty.

Ao Ba Ba is a collarless shirt with a piece of cloth on the back, two pieces on the front body, and two straps flowing from the top down in the middle.

Ao Ba Ba clings to the body and is frequently worn with long black or white trousers to highlight the Vietnamese women’s exquisite contours.

Thai ethnic women’s outfits are exquisite, highlighting the girls’ delicate attractiveness. A basic blouse and a long skirt with meticulous embroidered brocade designs are among the Thai ethnic traditional attire.

The sun, flowers, and dragons are the most popular motifs for embroidery. The costume is completed with belts and Pieu scarves, as well as a few silver pieces of jewelry that enhance the look.

The H’Mong ethnic group possesses elegant and beautiful traditional garments. These are mainly made of linen and feature a variety of colors and motifs. A black shirt, a bright skirt, leggings, and headpiece make up a complete costume.

The H’mong female attire is highly attractive and noticeable, and they frequently adorn it with silver coins and beads to enhance the aesthetics as well as express the ancient spiritual will of their ancestors.

Some believe that the traditional Cham women’s outfits are not as vivid as other women’s apparel in Vietnam. Yet, in my opinion, they have an exceptional appeal. Traditional garment is considered sacred and lovely by Cham women.

A tight-fitting tunic, a skirt in the same color as the shirt, and a lovely headscarf make up a complete outfit. The waistband, which is tied over the chest and around the waist and is boldly adorned with golden iridescent hues and exquisite workmanship.

It is the focal point of the costume. This ancient attire, worn by a woman with a fluid walk, is particularly lovely. This wonderful dress is from central Vietnam. In this picture you can see the temples of “My Son” in the background.

Each ethnic group in the more remote highlands, mountains, and plains has its own particular form of traditional wear. Practical considerations like freedom of movement when working are at the forefront of consideration with these clothes.

People in lowland areas, for example, frequently live in houses built on stilts over the water. They like utilitarian trousers, although shirts with emblems inspired by their surroundings, such as forest flowers, are common.

People who live in the mountains choose to dress in clothing that allows them to work in the fields and cross mountain passes easily. Bright colors and true creative ingenuity are two things that all such traditional costumes have in common.

In Vietnam, the conical hat (non la) is a popular hat. Its initial use was to keep the rain off of people’s faces while they worked in rice paddies or other outside jobs. It also served to shield the face from the harsh sun.

They’re created using natural materials found in the area, such as bamboo, palm leaves, and tree bark. The conical hats’ design allows them to be used for more than just this; they may also be used to carry groceries from the market or as a bowl to drink from.

You will still see this hat worn by many people, even in the larger cities of Hanoi and Ho Chi Minh. It has become an iconic symbol of Vietnam

Another thing that is worth looking at if you visit Vietnam is the method of silk production used in clothes.

Vietnam is a silk-producing country with a large population. This practice dates back to the year 1,000, when King Ly Thai Tong encouraged silk manufacture in Vietnam as a means of advancing the country’s economic prosperity.

Silk clothes are being produced in Vietnam today. Many people wear silk shirts and scarves, in addition to silk ao dai. Silk painting is another Vietnamese heritage that is practiced to this day.

There are many shops you can buy silk clothing from. But be careful. Khai Silk was caught putting “made in Vietnam” tags onto garments made in China. That is where local knowledge is invaluable.

Vietnamese traditional attire is typically plain and modest and is still worn in many parts of Vietnam. However, the youth of Vietnam prefer jeans, shorts and T-shirts.

Vietnamese ethnic groups’ attire has been impacted by foreign fashion and certain traditional costumes have been lost in favor of more modern and appropriate interpretations.

When visitors arrive to this gorgeous S-shaped country, the charming beauty that comes from the Vietnamese’s unique clothes still remains one of the appealing factors of visiting Vietnam.

In the schools of Vietnam you will often see the female teachers wearing the traditional dress. But most of the men wear trousers and shirts. It is still one of the great joys about teaching in Vietnam when going to your school and seeing the teachers in traditional outfits.

If you are considering a trip to Vietnam you will find some mind blowing opportunities for photo shoots. You could also look into costume rental options for some photo shoot selfies.

When you go home, nothing beats a wonderful photo taken in traditional Vietnamese garb to remind you of the incredible time you had in Vietnam. Here are some cameras I recommend for traveling around Vietnam. ==> GREAT TRAVEL CAMERAS <==

Alternatively you can purchase the Ao Dai or other costumes, or have them tailored to fit for a fee. Hoi An is a wonderful place to buy and haggle for clothes. Whatever you do, don’t forget your camera.

If you enjoyed this check out my other pages about etiquette and living in Vietnam.

Or get your Ao Dai sewing pattern here. Click for availability.